A Brief History of ENOS 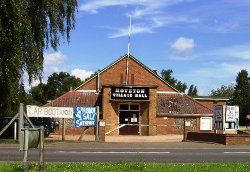 In 1959 a group of like-minded Wroxham and Hoveton residents interested in the Gilbert and Sullivan operas met at the home of Hilda and Donald Dickerson in Wroxham. The East Norfolk Amateur Operatic Society was born. A committee was formed and a constitution written, which has needed only a few changes through the years.

The ever popular Mikado was chosen as the first opera. Most of the cast and audience lived in the nearby vicinity and included family, friends and relations. Harry Balders was the Producer, the Musical Director George Bullen and the Stage Manager Leslie Landamore.

Rehearsals for the first few years took place in The Castle public house, which has since closed and is now a private residence, and thereafter at Wroxham Church Hall, where the Society still rehearses today. The operas were performed in Hoveton Village Hall. There was a small changing room for the ladies and a caravan for the men. There was not much room to change costumes and there was a need for the men to run to the stage when it rained!

The Gondoliers, HMS Pinafore, Iolanthe, The Pirates of Penzance, Trial by Jury, Ruddigore, Princess Ida, The Yeomen of the Guard, and The Sorcerer were all performed there.

The operas were always well received but the cast and audience outgrew the venue and so the Society moved to Broadland High School, in Hoveton, in 1970. The first production there was Patience, under the direction of Alec Court, the Musical Director being David Kett. The operas performed there included Utopia Ltd and The Grand Duke.

In 1993, a move to Sprowston High School in north Norwich, with Iolanthe, provided a still larger stage and auditorium. During Patience, in 1996, there really were twenty lovesick maidens! The Society also enjoyed a twenty four or twenty six piece orchestra. The Society's constitution does not dictate that the Gilbert and Sullivan operas should be performed exclusively and so, in addition to the Savoy Operas, Merrie England and Die Fledermaus have also been performed. 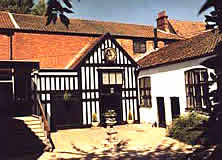 In 1998, the Society agreed to drop the word amateur from its title, thereafter being the East Norfolk Operatic Society. (This had previously been discussed twice in the 1960s but no action taken).

At the millennium, the Committee decided to take a fresh look at the Society and make plans for its future and decided that the 2005 production of HMS Pinafore should take place at The Maddermarket Theatre in Norwich. (This was also an idea raised in the 1960s). This proved to be a popular and successful decision, and all subsequent shows including our 50th and 60th Anniversary productions of The Mikado, have been performed there to great effect.