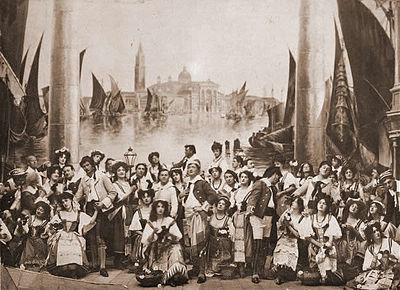 The Gondoliers or The King of Barataria is a Savoy Opera, with music by Sir Arthur Sullivan and libretto by W. S. Gilbert. It premiered at the Savoy Theatre on 7 December 1889 and ran for a very successful 554 performances (at that time the fifth longest-running piece of musical theatre in history), closing on 30 June 1891. This was the twelfth comic opera collaboration of fourteen between Gilbert and Sullivan.

The story of the opera concerns the young bride of the heir to the throne of Barataria who arrives in Venice to join her husband. It turns out, however, that he cannot be identified, since he was entrusted to the care of a drunken gondolier who mixed up the prince with his own son. To complicate matters, the King of Barataria has just been killed. The two young gondoliers must now jointly rule the kingdom until the nurse of the prince can be brought in to determine which of them is the rightful king. Moreover, when the young queen arrives to claim her husband, she finds that the two gondoliers have both recently married local girls. A last complicating factor is that she, herself, is in love with another man.

The Gondoliers was Gilbert and Sullivan's last great success. In this opera, Gilbert returns to the satire of class distinctions figuring in many of his earlier librettos. The libretto also reflects Gilbert's fascination with the "Stock Company Act", highlighting the absurd convergence of natural persons and legal entities, which plays an even larger part in the next opera, Utopia Limited. As in several of their earlier operas, by setting the work comfortably far away from England, Gilbert was emboldened to direct sharper criticism at the nobility and the institution of the monarchy itself. 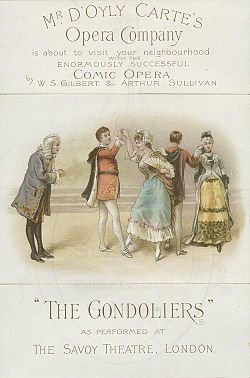 The scene opens in Venice with twenty-four young maidens declaring their passionate love for a pair of gondoliers, Marco and Giuseppe Palmieri. These two gondoliers are so gallant and peerless in their manly beauty that the maidens are waiting for them to select brides before they can consider other suitors. The male chorus of merry gondoliers enters, saying that they adore the young ladies, but the ladies explain that the two brothers must choose first. When the Palmieri brothers enter, the ladies present them with flowers. The two gondoliers amiably offer to pick their two brides in a game of blind man's buff. "As all are young and fair, and amiable besides", they feel it would be unfair to show any favouritism. They appear to be cheating by peeking out from under their blindfolds, however. Eventually, from the crowd of twenty-four maidens, Giuseppe picks Tessa, and Marco picks Gianetta – "Just the very girl I wanted!" (although the two then politely offer to switch girls). All leave to go to church for the double wedding.

His Grace the Duke of Plaza Toro (Count Matadoro, Baron Picadoro), Her Grace the Duchess, their beautiful daughter Casilda, and their drummer boy, Luiz, now arrive in Venice from Spain. They have come to meet Don Alhambra del Bolero, the Grand Inquisitor of Spain, who has summoned them to Venice. As Luiz goes to announce the Duke's presence, the Duke and Duchess tell their daughter a secret that they have kept for twenty years – when she was only six months old, she was married to the infant son and heir of the King of Barataria (a fictional island kingdom – in Don Quixote, Sancho becomes the governor of an island called Barataria). She is indignant, since the union was conducted without her knowledge. Also, as we soon discover, she is secretly in love with Luiz. However, the infant prince was stolen from his home by the Grand Inquisitor after the king of Barataria became a Wesleyan Methodist "of the most bigoted and persecuting type", and taken to Venice. The King of Barataria was recently killed in an insurrection, and the lost prince is now king. As the wife of the new king, Casilda is now the reigning queen of Barataria, and her parents have brought her to meet with the Grand Inquisitor to be introduced to her husband. Left alone together, Casilda breaks this news to Luiz, and they resign themselves to a life forever apart, with only their happy memories to comfort them.

When the Grand Inquisitor enters, he explains that the prince was raised incognito by Baptisto Palmieri, a humble gondolier, who had a young son of his own about the same age. The gondolier was a drunkard and eventually forgot which boy was his own son and which boy was the prince of Barataria. The two boys (Marco and Giuseppe) grew up and now are both gondoliers themselves. Fortunately, the nurse who took care of the infant prince (and who happens to be Luiz's mother), is now living in the mountains, married to "a highly respectable brigand". Don Alhambra says that he has located her and that she will be able to reveal which of the two gondoliers is the lost prince. If not, he says, "then the persuasive influence of the torture chamber will jog her memory."

In the next scene, the two gondoliers have married Tessa and Gianetta, and as they are extolling the virtues of marriage, Don Alhambra arrives and informs them that one of them is the King of Barataria, but no one knows which. Despite being Republicans, the gondoliers and their new wives are delighted, and agree to go to Barataria at once, acting as one individual until the actual king is identified. The Grand Inquisitor tells them, however, that ladies are not admitted until the actual king is identified, and then each couple can be reunited. The Grand Inquisitor neglects to mention that the King is married to Casilda, fearing that it would cause the men to refuse to leave their new wives. As the two wives are imagining what it will be like to be a queen, their friends enter, and Marco and Giuseppe announce their discovery and promise to reign in a Republican fashion. They announce that in their kingdom, "All shall equal be" and will create new posts such as "the Lord High Coachman on the Box, the Lord High Vagabond in the Stocks". All the men then set sail for Barataria, leaving their wives behind in Venice.

In Barataria, the chorus of gondoliers are enjoying living under "a monarchy that's tempered with Republican equality". It turns out that Marco and Giuseppe have in fact been doing all the work around the palace for the past three months - it is the privilege of royalty! They are happy enough with this arrangement, except that they are worried about having to share a single portion of rations between the two of them, and they miss their wives. Soon, however, all the ladies arrive, having risked the long sea voyage from Venice – they could no longer stand the separation. In delight, the reunited couples have a magnificent banquet and a dance (a cachucha). The Grand Inquisitor arrives at the ball and inquires why he saw unimportant servants dancing. Realising that the Republican gondoliers have promoted everyone to the nobility, he explains that there must be a distinction between commoners and those of rank, because "when everyone is somebody, then no-one's anybody". He then breaks the news that one of the gondoliers had married Casilda when a baby and therefore is an unintentional bigamist. The gondoliers attempt to console their wives, who are distraught to discover that neither one will be queen, and that one is married to someone who was already married.

The Duke and Duchess of Plaza Toro soon arrive with the beautiful Casilda. They are now dressed in style, and the Duke explains how he was applied for by the public under the Limited Liability Company Act, and how they now earn a very good living. Appalled, however, at the lack of pomp and ceremony with which they were received, he attempts to educate the two monarchs in proper royal behaviour. After a lesson in etiquette, the two Palmieri brothers are left alone with Casilda. She agrees to be an obedient wife, but warns them that she is "over head and ears in love with someone else." Seizing this opportunity, the two men introduce their wives. The three ladies and two men sing a quintet about their unprecedented predicament.

Don Alhambra brings in the nurse who had tended the infant prince of Barataria twenty years ago. She reveals that when the Grand Inquisitor came to steal the prince, she had loyally hidden him away, and given Don Alhambra her own young son instead. Thus, the king is neither Marco nor Giuseppe, but her own son, Luiz. This resolves the romantic entanglements to everyone's satisfaction. Casilda finds that she is already married to the man she loves, Luiz. The two gondoliers surrender their crown to Luiz and, though a bit disappointed that neither will be a king, they can return happily to Venice with their wives. There is a final dance for the full company, reprising the gondoliers' Act I duet and the cachucha.