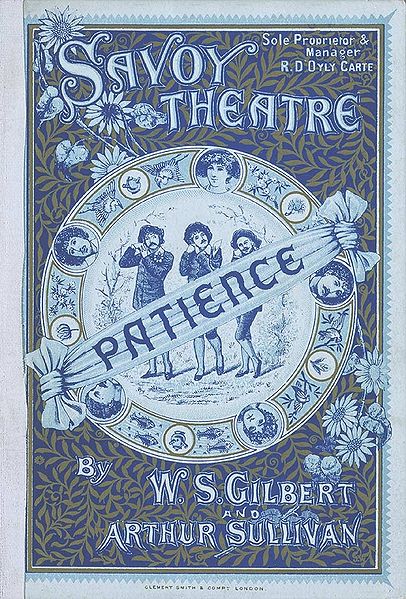 Patience or Bunthorne's Bride, is a comic opera in two acts with music by Arthur Sullivan and libretto by W. S. Gilbert. First performed at the Opera Comique, London, on 23 April 1881, it moved to the 1,292-seat Savoy Theatre on 10 October 1881, where it was the first theatrical production in the world to be lit entirely by electric light. Henceforth, the Gilbert and Sullivan comic operas would be known as the Savoy Operas, and both fans and performers of Gilbert and Sullivan would come to be known as "Savoyards."

Patience was the sixth operatic collaboration of fourteen between Gilbert and Sullivan. It ran for a total of 578 performances, which was seven more than the authors' earlier work, H.M.S. Pinafore, and the second longest run of any work of musical theatre up to that time, after the operetta Les Cloches de Corneville.

In front of Castle Bunthorne, a group of "lovesick maidens" are all in love with the aesthetic poet Bunthorne ("Twenty lovesick maidens we"). Lady Jane, the oldest and plainest of the ladies, informs them that Bunthorne, far from returning their affections, has his heart set on the simple milkmaid, Patience. Patience appears and confesses that she has never loved anyone; and she is thankful that love has not turned her miserable as it has them ("I cannot tell what this love may be"). Soon, the ladies' old sweethearts, the Dragoon Guards, appear ("The soldiers of our Queen"), led by Colonel Calverley ("If you Want a Receipt for that Popular Mystery"), Major Murgatroyd, and the droopy but immensely rich Lieutenant the Duke of Dunstable. They arrive ready to propose, only to discover their beloveds fawning over Bunthorne, who is in the throes of poetical composition, pretending to ignore the attention of the ladies thronging around him ("In a doleful train"). Bunthorne reads his poem and departs, while the officers are coldly rebuffed and mocked by the aesthetic ladies, who turn their noses up at the sight of the red and yellow uniforms. The Dragoons, reeling from the insult, depart ("When I first put this uniform on").

Bunthorne, left alone, confesses that his aestheticism is a sham, and mocks the movement's pretensions ("If you're anxious for to shine"). Soon, he reveals to Patience that, like her, he does not really like poetry, but she tells him that she could not love him. Later, Lady Angela, one of Bunthorne's admirers, explores with Patience the latter's childhood crush ("Long years ago"). Lady Angela rhapsodises upon love as the one truly unselfish pursuit in the world. Impressed by this eloquence, Patience promises to fall in love at the earliest opportunity. That opportunity is provided by the arrival of Archibald Grosvenor, another aesthetic poet who turns out to be Patience's childhood love. He has grown up to be the infallible, widely-loved poet known as "Archibald the All-Right" ("Prithee, pretty maiden"). The two declare themselves in love but are brought up short by the realisation that as Grosvenor is a perfect being, for Patience to love him would be a selfish act, and therefore impossible; thus, they must part.

Bunthorne, heartbroken by Patience's rejection, has chosen to raffle himself off among his lady followers ("Let the merry cymbals sound"), the proceeds going to charity. The Dragoons interrupt the proceedings, and, led by the Duke, attempt to reason with the ladies ("Your maiden hearts, ah, do not steel"), but the ladies are too busy clamouring for tickets to the raffle to listen ("Come walk up"). Just as Bunthorne is handing the bag to the unattractive Jane, ready for the worst, Patience interrupts the proceedings and proposes to unselfishly sacrifice herself by loving the poet ("True Love must single-hearted be"). A delighted Bunthorne accepts immediately, and his followers, their idol lost, return to the Dragoons to whom they are engaged ("I hear the soft note of the echoing voice"). All seems resolved, when Grosvenor enters and the ladies, finding him poetic, aesthetic, and far more attractive than Bunthorne, become his partisans instead ("Oh, list while we a love confess"), much to the dismay of the Dragoons, Patience, Bunthorne and especially Grosvenor himself.

Lady Jane, accompanying herself on the cello, laments the passing of the years and expresses her hope that Bunthorne will "secure" her before it is too late ("Silvered is the raven hair"). Meanwhile, Grosvenor wearily entertains the ladies ("A magnet hung in a hardware shop") and begs to be given a half-holiday from their cloying attentions. The Dragoons' Major, Colonel, and Duke attempt to earn their partners' love through making an effort to convert to the principles of aestheticism ("It's clear that mediaeval art"). Then, Patience confesses her affection for Grosvenor to Bunthorne, who is naturally furious at the revelation.

Confronting Grosvenor, Bunthorne threatens him with a dire curse unless he undertakes to become a perfectly ordinary young man. Grosvenor, intimidated, but also pleased at the excuse to escape the celebrity caused by his "fatal beauty" agrees to do so. This plot backfires, however, when Grosvenor reappears as an ordinary man; all of the ladies follow him into ordinariness, becoming "matter-of-fact young girls." Patience realises that Grosvenor has lost his perfection in her eyes – and therefore, it will not be so selfish for her to marry him, which she undertakes to do without delay. The ladies, following suit, return to their old fiancés among the Dragoons. In the spirit of fairness, the Duke chooses the "plain" Lady Jane as his bride, for her very lack of appeal. Bunthorne is left to the "vegetable" love that he has claimed (falsely) to desire most of all. Thus, echoing the subtitle of the piece, everyone sings that "Nobody be 'Bunthorne's bride'."